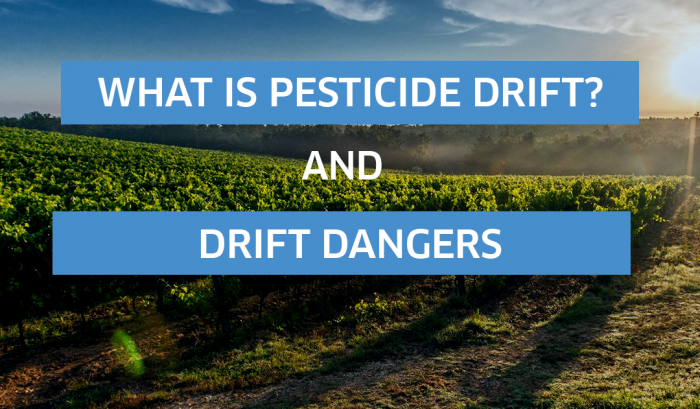 Consumers are constantly looking for healthier food options and are a lot more conscious about what they put in their bodies. Products labeled as “Organic” “Non-GMO” or “Pesticide-Free” are becoming the first choice when compared to products without them. The use of pesticides has become somewhat of a controversial topic with advocates on both sides making their case. Some pro-pesticide advocates claim that the responsible application of pesticides can help ensure farmers have bountiful harvests, keep food costs lower, and reduce waterborne and insect-transmitted diseases. Those against pesticides claim that many, if not all pesticides have toxic effects and should be banned altogether, especially when they have the potential to drift and expose those living nearby treated areas. If you live nearby a farm, the chances are that this topic has come up before.

What is Pesticide Drift?

The spread of pesticides from the area of application to surrounding areas via air is known as pesticide drift. This drift can occur during the application of pesticides through particles in the air or after the application when certain pesticides convert into vapors that disperse in the surrounding areas. According to environmental protection agencies such as NRDC (Natural Resources Defense Council), more than one million pounds of chlorpyrifos, a pesticide linked to developmental delays and learning deficits in children, are being used in California alone. Throughout California, more than 150 schools sit within a quarter-mile of chlorpyrifos applications. Pesticides have a wide range of potentially harmful effects depending on the level of toxicity and the duration of exposure. Effects range from relatively benign such as a runny nose, cough, wheezing redness, and irritation, or can cause serious neurodevelopment and growth disorders in children. Other serious potential negative effects include infertility, tumors, kidney diseases, and other pulmonary disorders. Drift also endangers wildlife and there are strict laws against pesticides in several countries to preserve endangered land and marine species.

Since pesticides are odorless, it becomes difficult to monitor them and levels can increase rapidly without those affected being aware. Therefore, control from protection agencies is key along with proper a proper testing plan.

Neonicotinoids (imidacloprid, clothianidin, thiamethoxam), while very effective at controlling insect populations are said to be increasing the toxic load of agricultural ecosystems across the world. The downstream effects include the spread of these pesticides by bees that not only harms them but also eventually makes its way into honey products ingested by humans. For commonly used pesticides like glyphosate (known as “Round-Up”) The United States EPA (Environmental Protection Agency) established tolerances for its use on a wide range of crops including corn, soybean, oilseeds, grains, and some fruits and vegetables, ranging from 0.1 to 310 ppm. Laboratories such as Adamson Analytical in California has developed multi-methods that screen for over 700+ chemicals that are routinely used in pesticide products using state-of-the-art GC-MS/MS and LC-MS/MS instrumentation. A specialized method has also been developed to analyze Glyphosate separately. The details of either method can be discussed with our technical experts.

Read More: Analysis of Glyphosate residues in our daily Products

Tentamus laboratories in your vicinity

This website uses tracking cookies to track the surfing behavior of users and thus optimize the website and services for you. Data may be transferred to Google servers, e.g. in the USA.I agreeI disagree